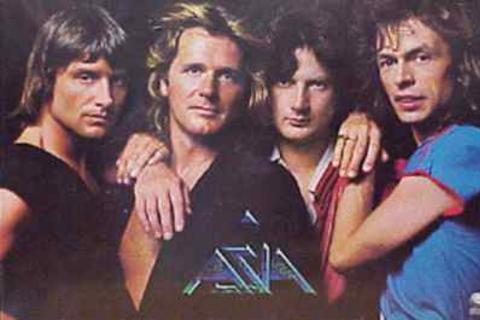 This is ASIA' most famous photo 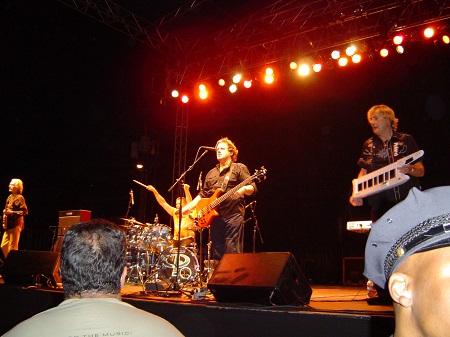 Welcome to Asia Fan Club (com).  Thank you for being with us, just the fact that you are here, you are most likely a diehard fan of the original line up.  For those of you who may have stumbled onto this site, let me provide you with a brief introduction (long story short).  In the 1970’s, lived a vast array of many progressive rock bands.  ELP, Yes, King Crimson were amongst the great ones.  In the later part of the 1970’s, the style of music started to change, as disco became the fad.  Although rock and roll never died, the diehards were considered out of style.  However, by 1980, it appeared that disco started to become stale as well.  It was obvious that rock and roll needed a good, swift kick in the ass.  One of the bands that provided this swift kick was Journey, with their legendary album Escape.  Atari even had a video game about the album.  That same year, Brian Lane masterminded the concept of Asia, which consisted of legendary guitarist Steve Howe, arguably the most versatile guitarist of all time.  Steve Howe was Guitar magazine’s world greatest versatile guitarist five consecutive years.  Legendary ELP drummer Carl Palmer, is arguably the world’s greatest progressive rock drummer.  Many arguments have often come down to Carl Palmer and Neil Peart of Rush.  Legendary keyboardist Geoff Downes, formerly with the Buggles, was also was a member of Yes.  King Crimson’s bassist John Wetton is famous in the progressive rock community.  He is known as the golden voice of progressive rock.  In 1981, these four men locked themselves inside of Townhouse Studios in London to create what would be known as the Asia album.  They had poured old fashioned blood, sweat, and tears into the creation of this album.  Digging deep inside of their progressive roots, they created an album of sophistication, done with extreme precision, while creating an epic new sound.  I believe Brian Lane described it best as progressive rock, with the fat cut off.  Asia created a new style of progressive rock that brought back legendary Yes.  Their biggest selling album of all time, was 90125.  It followed Asia’s progressive rock, with trimmed off fat format.  In the mid part of the 80’s, Steve Howe started a new band called GTR, which is the only album to reflect the signature of the first Asia album than any other album, including subsequent Asia albums.  The Asia-sounding Here I Wait and When The Heart Rules The Mind brought back the aura of the first Asia album.  ELP, with Powell replacing Palmer, scored a smash hit with the Asia-sounding song Touch and Go.  The Asia debut has now sold over 15 million albums worldwide and was the number one album in America for nine consecutive weeks.  Asia’s follow up was recorded in Canada.  It, at times, expressed although somewhat warily, the first album.  During the Alpha tour, problems began to arise in Asia and Greg Lake was asked to step in, as seen in the legendary Asia in Asia concert, broadcasted live via satellite on MTV.  In 1985, Asia returned, but without the greatness of Steve Howe.  In 1989, Asia toured once again without the greatness of Steve Howe.  Out of this tour was created the legendary Asia in the USSR concert.

In 1999, it had come to my attention, that there was a failed Asia reunion attempt.  In January 2000, I had started my first club on Yahoo, and later evolved to be famously known as Asia Fan Club.com.  Listed in the Official Asia biography.  I and other fans on my site had lobbied for six years to reunite this band, which had seemed to be against all odds.  It had caught the attention of one of the Asia member’s manager. and we had stayed in contact through many emails. In 2001, I had asked Steve Howe to get back with John Wetton; he was receptive to my interests.  In 2002, I had pleaded with John Wetton and Geoff Downes to do it for me.  Through subsequent years, I was being encouraged by higher ups in emails, to keep it going, as my site displayed the fact that there was an interest in the original lineup.  In 2006, I was contacted by email to announce the reunion on John Wetton’s old guest book.  In 2006, I had the pleasure of going to the Hard Rock Café with Geoff Downes.  As soon as we sat down, he stated to me, they did what I asked.  The morning after, John Wetton said similar words to me in the lobby at Foxwoods Hotel Resort and Casino.

There have been many incarnations of Asia, but this site continues to honor the original vintage lineup, for their debut album shall live on in infamy.  Peace and love to you all.